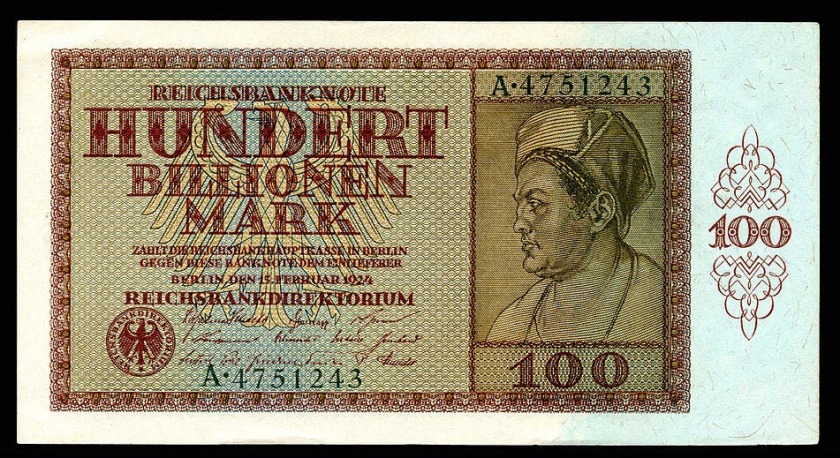 Inflation. What does it mean?

It means the money tomorrow is worth less than what it was yesterday. The money has less purchasing power. Have you ever opened up an old magazine or seen an old advertisement? Buy a new Honda Accord for $9995 USD. A six pack of Budweiser Beer $2.99. College tuition $5000 per year. What magical world was this? Cheap stuff sure but people’s paychecks were smaller too. It was all relative just like the pictured note for 100 billion marks.

Why do we get raises or merit on our paychecks every year (or we hope)?

These in reality are mostly cost of living adjustments unless you got promoted or took a new job. Cost of living increase is inflation adjustment. Central banks want there to be inflation. Their target is 2% per year in the USA and 1-2% elsewhere. Crazy huh? They want things to be more expensive in the future so that people spend now as opposing to holding onto to their money. Sounds kind like 1920s Weimar Germany eh? The reason for this is they are deathly afraid of deflation. That is the time of falling prices, meaning things are cheaper in the future than now. So people hold onto their money and don’t spend and this hurts the economy. Japan has been in this kind of deflationary funk for the the last fifteen years. So basically the authorities have designated that your money lose value over time. Theft! Well it kind of is but that is the world we live in.

How high is inflation per year?

Great question. It depends on who is doing the measuring and what metrics they use. It also depends on where you live. In the USA the Fed has set a target of 2% per year. In other countries around 1% to 6% or more. Things are more certainly getting more expensive, just look at the cost of healthcare, housing/rent, college education and daycare. Looking at the cost of those items one would think that inflation was far higher than the 2% the Fed can’t get to. In the USA I personally think the basket of goods the Fed uses to measure inflation is wrong as it excludes food and energy. My guess is that it’s closer to 3% or more. Once the new import duties/ tariffs go into effect I expect it to be a lot higher.

How do I deal with inflation as a frugal saver?

First of all you should be getting cost of living or pay raises every year of a few percent. This is to keep you even. If you are pay is flat over a number of years your pay is falling behind and you are making less money in real terms.

Checking and savings accounts: At most commercial banks one gets nearly nothing in interest. 0.4%  interest versus 2% inflation means you lose money every year. Internet banks are higher but still less than inflation.

Credit unions: These are non-profits so they pay higher rates on savings. They may pay 1% on savings. Great compared to banks but still not good compared to inflation. This would be a place to put your emergency funds. I like credit unions due to this but ATM access can be an issue.

CDs: These may yield 1%-1.5% which is again ok but not great. Still behind inflation.

To keep up you are going to need to take some risk. That is the goal of the central banks. Get you to spend or invest.

Stocks and Mutual funds: In general stocks will outpace inflation but wide margins over time even if there is price volatility. This is due to the fact that companies can raise prices to pass the costs onto to their customers and consumers to compensate. They are also going to try to grow their earnings.

Real estate and REITs:  Real estate in general goes up in value with inflation. Why? Landlords will raise the rent to cover for higher costs. So housing prices also rise as do those of townhouses, condos, vacation homes and the like. Those are just a proxy for rentals as any place can be a rental.

Bonds and bond funds: These should also keep up with inflation unless they are government bond funds with very low rates or even negative yields like in Europe. The reason for this is that investors won’t lend money for less than inflation. Risk free rate + risk premium = return rate

Investors need to be get paid for the risk they take. The risk is that that some deadbeat won’t pay or that interest rates go up. When rates up the bonds that pay lower rates go down in value as people want the higher paying ones. On the flip side when rates drop the bonds paying higher yields (old ones)are worth more than the bonds that pay lower yields (new ones). It has even gotten to the crazy point that there are now $17 trillion negative interest rate bonds that people are buying in the hope that yield drop even further and they make money this way.

With bonds we need to be careful of credit quality. No junk bonds as the company may go broke and not be able to pay it’s obligations back. That is why they are called junk, ie high yield debt, cause they are not investment grade. Some slick investment banks package them together to make it safe they claim, but a whole bunch of crap in a bag does not make it any less crappy.

For bonds just buy a broad based bond funds not individual ones. The fund should include a mix of corporate, sovereign debt, maybe some municipal debt too. Leave it to the fund manager or index to deal with.